Use of land
The production of biodiesel does not compete with the production of food crops. The use of crops for biofuels that can also be used for food has been limited since 2015 by European legislation .

About 77% of the world’s agricultural area is used for the production of animal feed for meat and dairy. The rest of the acreage, approximately 23%, is used for directly consumed crops such as vegetables, grains and oilseeds. The following figure shows how the cultivation of biomass relates to land use for agriculture, livestock and other applications. 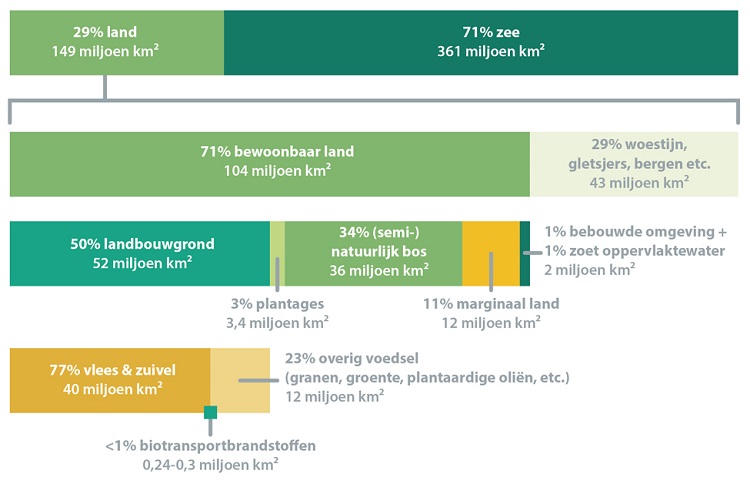 Proteins for animal feed
Moreover, the crops from which vegetable oil for biodiesel is extracted have more applications than just biofuels. In oil mills, oilseeds and beans are separated into oil and flour. The oilseed meal consists largely of proteins and is an important raw material for animal feed. The cultivation of rapeseed in Europe therefore kills two birds with one stone: a contribution to a reduction in CO2 and more local production of proteins that would otherwise have to come from North or South America. This reduces the pressure on deforestation in South America.

Other benefits
Soy plants fix nitrogen from the air, which increases soil fertility. Rapeseed plants root deeply, which is good for soil fertility and naturally combats nematodes that are harmful to other crops grown after the rapeseed.

Biodiesel has no effect on food prices
Several studies have shown that biodiesel production has almost no impact on food prices. There is, however, a relationship between the price of fossil oil and agricultural products in general. The FAO’s food price index shows that after two peaks in 2007 and 2010, food prices have stabilized at a lower level, while the amount of biofuels has continued to grow steadily over that period. The two price peaks can mainly be explained by the high prices of fossil oil in that period.

Food waste
Sufficient food is currently being produced in the world. Unfortunately, a lot of food is also wasted. According to the Food and Agriculture Organization of the United Nations (FAO), about a third of the food produced for human consumption – about 1.3 billion tons – is lost every year. By working more efficiently, we can get more yield on the current acreage that is used for raw materials, so that we have enough raw materials for both food and energy now and in the future. That is also the conclusion of a research from the University of Utrecht.